WHY YOU SHOULD COMPETE IN CROSSFIT COMPETITIONS

Tomorrow, we have a large group of athletes that will be heading down to CrossFit Now in Tucson, AZ to compete in the CrossFit portion of the 2013 Arizona Police and Fire Games. Because of a scheduling snafu with the CrossFit Rowing Certification on Saturday, Brian and I cannot join our team in the competition. Both of us are super bummed that we can’t watch our Incendia Competitors duke it out with other Police/Fire CrossFitters.

Brian is also super bummed that he cannot compete, but dare I say that I’m kind of happy to NOT have to compete? This is where Brian and I really differ in our CrossFitting. Brian LOVES to compete. Competition energizes and motivates him; whereas, competition scares and paralyzes me. I HATE to compete. I like to watch other people compete and I will be their loudest cheerleader, but it absolutely freaks me out to be the one competing. There is something about having everyone watch me CrossFit while screaming at me to move faster/keep going/get one more rep that brings on the worst case of anxiety known to man. I feel like I’m not working hard enough when I hear everyone yell at me and I feel like I’m letting them down. I know in my rational mind that the yells are meant for encouragement, but I can’t help it – I feel like I’m just not doing enough work when I’m in that situation. You would think that I had a Traumatic Competition Experience or something with my Competition Anxiety (does peeing my pants during a WOD in the 2012 Garage Games count as a traumatic experience?). 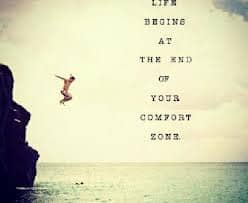 I have decided it’s time to do something about my Competition Anxiety and get out of my comfort zone. The only way to do this is to compete. Ugh. But, I’m going to do it. If you feel the same as me, you should join me in this journey to tackle this fear. I have compiled a list of reasons why you and I need to compete and I plan to refer to this blog post each and every time my Competition Anxiety surfaces:

1. Competition will increase our motivation to learn CrossFit.

I don’t like doing stuff I don’t do well. There are some things in CrossFit I super suck at including pull ups, toes to bar, and snatch. When these movements are programmed in to WODs at the gym, I tend to avoid them. Its too easy to jump into a 101 Class on any given day I don’t feel like working on my snatch. No more!  I commit to working on all my CrossFit weaknesses and you should, too. I wish we could walk around doing pistols all day, but how many times have you seen an all-pistol CrossFit Competition? Yeah, never.

2.  We will learn something about ourselves.

Do you remember the first time you did a handstand hold against the wall? I do. I was so scared, I wouldn’t even kick up. I was panic-stricken, like needing-Xanax-panic-stricken. All I could think about was crashing down on my head, breaking my neck in the process. Luckily Brian was also at the gym WODing that day. He came over to my Prep Class and coaxed me up the wall. (By “coaxed,” I mean he physically lifted my legs up and put them on the wall, but whatever.) I’ll never forget how I felt once I completed that movement. I was elated and gained some much-needed CrossFit confidence that day. I learned that I was physically capable of doing this movement, but my head got in the way. I think that happens a lot. We are physically capable of doing all the difficult CrossFit movements, but our fear gets us every time. No more! Let’s commit to pushing past the fear and finding out what we are really capable of.

There’s always an athlete at each competition that inspires me. It might be the “masters-age” man with the gray hair that butterflies his pull-ups like he does it in his sleep. It might be the skinny girl that throws up 95 pounds overhead consistently (Hi Andy!), even though it’s about equal to her body weight. It might be the veteran in the wheel chair who is missing his legs, but competing alongside everyone else (and kicking ass.) It might be the mom that just had a baby six weeks ago and is giving it hell while her little one sleeps soundly in a baby carrier nearby. These people, who demonstrate courage and tenacity, make me so proud to WOD next to them. They inspire me to get over my fears (which seem so silly compared to what they’ve overcome). They will inspire you, too.

Who knows? Someone inspired us, right? You just might be the person who inspires others. I often think about my seventeen month-old little girl and what her future in CrossFit will look like. I don’t want Cameron to be scared of anything. I want her to get on that pull up rig and kip with abandon. I want her to go to the top of the rope. I want her to do 10 consecutive muscle ups. Hopefully, by watching her middle-aged mom compete to the best of her abilities in CrossFit Competitions, Cameron will be inspired to do the same. Your kids, spouse, neighbors, co-workers will be inspired by you, too!

It could almost be considered a fantasy at this point, but what if I actually won a competition and had an opportunity to stand on the podium at the end? I can’t even imagine what that would feel like, but it would be terrific. I was never an athlete as a child – or even in my first 19 years of adulthood. I didn’t have those types of sports experiences. I didn’t play Little League. I didn’t play high school sports. I was never on a team. For someone like me who has never won any type of award/ribbon/trophy for anything physical, it would be truly amazing. How lucky we are that through CrossFit we can complete. There are competitions almost every weekend where we can get out and prove our stuff. Maybe two minutes of max rep pistols will come out of the hopper at my next competition? One could be so lucky…..but, this is CrossFit. You never know what you’re going to get.

I know all the Incendians heading down to the Police and Fire games are going to dominate! We wish you the best of luck and hope you keep us updated throughout the day. To everyone else on the fence about competing, join me Monday as we train together to overcome our fears. We’ve got this!

WHY YOU SHOULD COMPETE IN CROSSFIT COMPETITIONS2013-04-112013-04-11https://www.crossfitincendia.com/wp-content/uploads/2020/05/horizontal-flag-logo-no-fill.pngCrossFit Incendiahttps://www.crossfitincendia.com/wp-content/uploads/2020/05/horizontal-flag-logo-no-fill.png200px200px
Showing 4 comments
pingbacks / trackbacks