And, the winners are….Mike Clark and Tish McCall! Congratulations to both of you for a job well done! We are so proud of you. 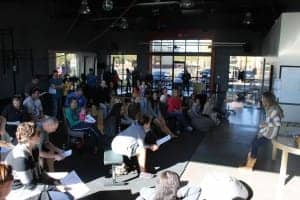 The CrossFit Incendia Spring 2013 Paleo Challenge began on January 7, 2013 with a kick-off meeting and a shopping trip to Sprouts. We expected 25 people to participate – maybe 30 at the most. What we ended up with was almost 50 participants who were excited to make a change in their lives. The commitment and participation in the Challenge was amazing. People made life-long nutrition changes in just 60 days and it was a blessing to watch the transformations.

The rules were simple: $500 would be awarded to one person based on 1) body composition change, 2) participation in the Challenge and 3) decrease in row times. Because participation in the Paleo Challenge was so great, we were able to up the ante and offer a $500 prize to one male and one female challenger. The overall results were AMAZING. It took the Coaching Team almost two hours of deliberation to find the winners because there were so many people who had changed so much.

We celebrated the end of Challenge with a big ‘ol Paleo Potluck at the gym. Everyone brought their favorite dishes to share, we had a bounce house for the kids, we watched the UFC fight, played cornhole and just enjoyed each other’s company. It was a great CrossFit Community night.

What do you think of Mike and Tish’s results?

So, who wants to give Paleo a shot? After looking at these photos of real-life people – people you sweat next to at the gym on a daily basis – are you ready to make a nutritional life-change? You can do it…but, it’s much easier with the support of your friends. Ask Mike and Tish!